If you have been playing around with Aurelia like I have you may reach a point where you would like to stop sending almost 3MB to load the simplest of sites. Well if you have reached that point you're in luck. You can bundle your app!

Bundling web assets is a method used, usually with minification, to improve load times of your web app. In the case of my super simple Aurelia app that have one html template and one JavaScript file with a class with one property the unbundled and unminifide page load was 2.8MB.

What I Started With

For the purpose of learning bundling I created a super simple Aurelia app that had one component consisting of one view and one view-Model. And here they are in there entirety.

Of course I had to have an index.html as well and that looked like this:

As you can see there really wasn't much to my little app but it still resulted in a page load that required the 2.8MB(!) on downloads I mentioned earlier. 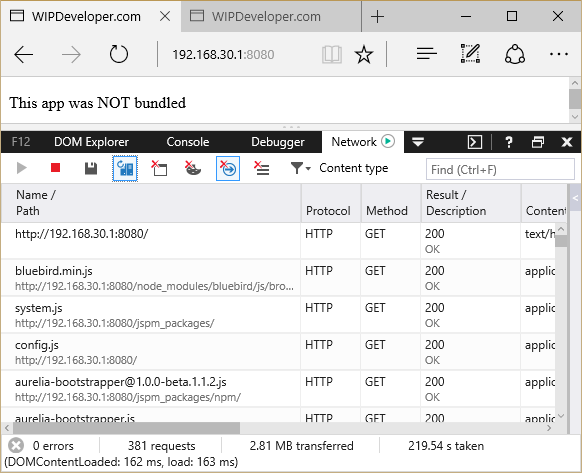 Since the this is obviously something that we don't want to see in production something should be done about it.

The folks working on Aurelia have put together a library to help bundle Aurelia app it's called aurelia-bundler. You can install it with npm:

and use it in a gulp task.

One thing that you will also need is to install the jspm text plugin for the aurelia-bundler to work.

Some basic gulp setup is required:

I added the clean task to remove the previously bundled files when rebundling.

Then a configure is required:

Some things you may want to understand from the config.

Each bundle configuration has it's name the "app/app-build" specifies the bundle path and name of the file from the root. So in this case the bundle will be put into the app folder and the file created will be named app-build.js. Other features of a bundle include properties for:
- includes : the module names, it may be patterns as well *, **/**/*, [*] - excludes : modules or patterns to exclude - options : a collection of options such as inject, minify, and a few others

So the first bundle in my config is going to consist of my js, html and css files that match the patern provided.

The second bundle will consist of my Aurelia libraries.

Finally, you will need to create a gulp task to use the bundle function and pass it the config.

As you can see the results of bundling greatly reduces the payload size of your page and speeds up the page load times.

Bundling can help improve performance of your site. With the possibility to create multiple bundles you could create different bundles for various sections of your site to only users who went to lesser accessed areas would be downloading the additional files. What do you think? Have a suggestion? I would like to hear it, leave a comment below or send an email to me at brett@wipdeveloper.com.