During Salesforce DX – Setup I mentioned using the readme.md at sfdx-simple. Lets take the sample code and push it to the org we created last time.  But first let's see what it has how the sample app is structured.

The repo has 3 main directories:

The dev guide says that project workspace can be set up at the in a flexible manner with the only exception being Lightning components needing to be in a directory named aura.  We'll see how flexible later :)

The repo also has the .gitignore, a .project, the LICENSE, the README.md, and the previously mentioned sfdx-workspace.json.  Let's talk about them:

The actual working files (apex, visualforce) can be seen as well.  Here is the complete file structrue: 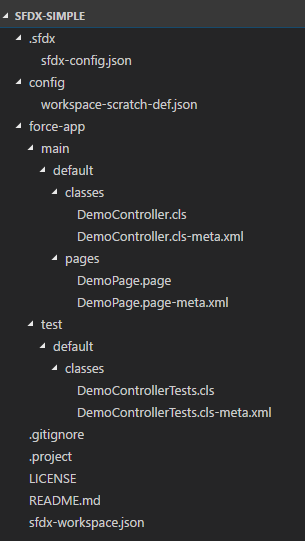 Let's push this code to our scratch org using the sfdx force:source:push  command and see what happens:

As you can see it sent the Apex Classes, both of them, and the Visualforce page with the meta xml files.

Here you can see it returns the test id along with the sfdx command to run to see the results force:apex:test:report -i 7073D000000Ib8wtes.  So lets see what our tests result was.

There you have it One test passed, YAY!

We now have pushed the sfdx-simple sample to our scratch org and ran some tests.  Pretty exciting so far!  Have something you would like to add?  Let me know by leaving a comment below, emailing brett@wipdeveloper.com or following and yelling at me on Twitter/BrettMN.