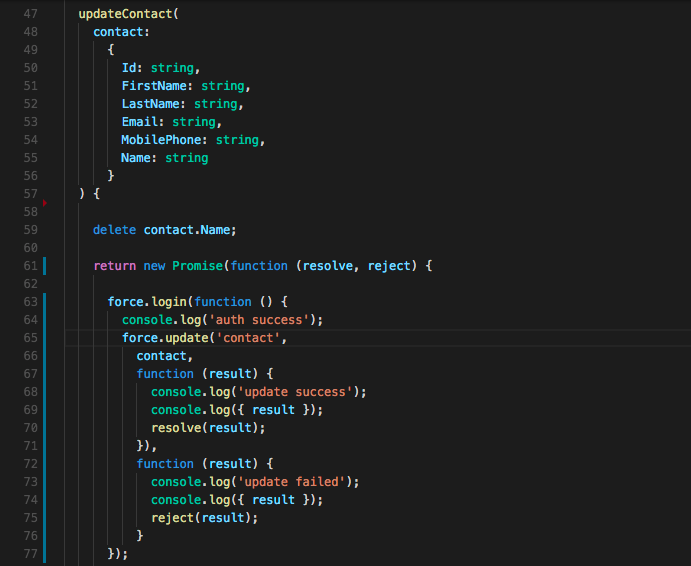 In the process of trouble shooting our issue with saving changes to contacts we have looked at it on Android and on iOS.  We have one more thing to check before we start, but first a recap.

We are trying to update a contact with using the ES6 version of ForceJS.  On Android we do not get an error but we can a response that  get an errorCode of METHOD_ NOT_ALLOWED with a message of HTTP Method 'POST' not allowed. Allowed are HEAD, GET, PATCH, DELETE.  On iOS things are simpler since an error is thrown to the console and it states TIMING com.salesforce.network.pgSendRequest failed so it looks like the issue is related to sending the request.

Now before we go to the SalesforceMobileSDK Google group I feel we should rule out the  ES6 version of ForceJS.

Let's download a copy of force.js from the repo, include it in our www folder, and add a reference to it on the src/index.html.

Now we need to make use of it in our service.

// Tell TypeScript that I know better than it declare var force :any;

I'm giving it a type of any so I don't have to define everything... basically I'm lazy and we are just using this to prove things are or are not working when using the Salesforce Mobile SDK with the ES5 version of ForceJS

Now we will need to change our updateContact method to make use of the force that is a global object.

I'm making use of a promise so I don't have to make any changes elsewhere in our app.

Now we should be ready to run npm run build and cordova prepare and see if anything is different.

And... I know your dying of suspense here.. It's works for both Android and iOS.

Well we can edit a contact now, so there's that.

Don’t forget to sign up for The Weekly Stand-Up! to receive free the WIP Developer.com weekly newsletter every Sunday!

Looking for the code and want to follow along?  Find it on GitHub.com/BrettMN/salesforce-sdk-mobile-with-ionic-starter