Last time we talked about Visualforce with Angular we got Remote Actions working. This made it so we could get data from Salesforce but we could no longer develop locally. Let's set up some mocking so we can still develop locally and make more rapid updates to our app.

In your Angular app source folder (src-ng/src) let's create a new folder, I will call mine remoteMocks. I will also add a new JavaScript file to it called mock.js. This will be the main files used to call the mock @RemoteActions and should look like this:

Simple as that, turtles all the way down to the function call.

Now before we get to far you may be wondering why we are using a JavaScript file and not a TypeScript file, after all we are using TypeScript with all the Angular stuff. Well if we created this and the mock controllers as TypeScript files we would have to transpile them and reference them on the index page since we don't want to bundle them with the Angular app through the CLI. Without transpiling them and adding script tags to them on the index.html we would have to import them to our service to use them, they would end up getting bundled, we would have to remember remove the import statements and they could still possibly get bundled with the app.

So let's keep it simple and use JavaScript files here and not worry about accidentally bundling some sample data with our Angular app.

Now we are ready to set up a mock response from an Apex Controller Method. Add a second JavaScript file to the remoteMocks/ folder called TryAngularControler.js. It will look something like this:

Here we declare a variable mockRemotes and assign mockRemotes to it if it already exists, if not we assign an empty object to it. This is a way to share an object between files and not destroy the object if it already exists but extend it. Then we use the controller name and method name to assign a property to the mockRemotes object and of course that property is a function. I define a resultsText that I assign a value of the remote action I want to mock. In this case I loaded up the page from last time with the dev tools open to network and copied the response from apex remote. I did have to add "status":true, to it and I did this after the "statusCode":200.

After the results are faked I used JSON.parse to create the event object and then call the callback function with the results and the event.

Remember that index.html we copied our Visualforce page layout from? Well it has a base template that we can update with script tags to our new mock.js and TryAngularControler.js. This will allow us to load it locally so we can update our app quicker.

Open src-ng/src/index.html and add script tags for our mocking setup

Now run ng serve -open and everything on the page should behave as if it were getting a response from the Apex controller. After all it is, just not a fresh one. 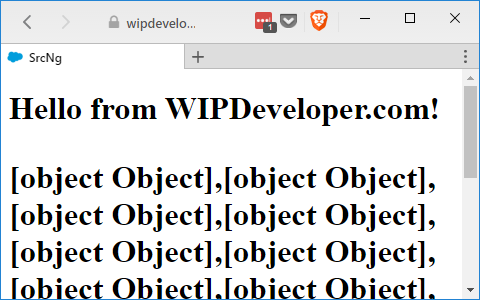 We can now work on updating parts of our app without having to save to Salesforce. This potentially will speed up some parts of development. Where do you think this could be most beneficial? Let me know by leaving a comment below or emailing brett@wipdeveloper.com.